Both Robert Ryman’s and Agnes Martin’s art are considered abstract expressionist, although often referred to as minimalist. Both artists were in admiration of Barnet Newman and emerged into the art world in the 1960s at the same time as Robert Rauschenberg, Donald Judd, and Ad Reinhardt. Both considered painting to be about composition rather than color. And both painted with shades of white. But this is where their similarities end.

Robert Ryman’s art is an intellectualised study of process. One could say he is a painterly alchemist. His art considers balance, scale, and light. Each piece reveals a new fact of relations between his choice of material; whether using gauze, tracing paper, corrugated cardboard, steel, copper or aluminum as a surface combined with oil, gesso, acrylic or enamelac to obtain the choice white pigment. He would use varied size brushes applying heavy layers of paint or thin layers of paint. He would allow the background material to peek through or put a layer of color between the surface and the white pigment. They were not white paintings, but factual paintings where each skillfully told a story about balance, aesthetics, and process.  Only the cleanliness of white could reveal the facts clearly (and Ad Reinhardt had already laid claims to the color black).

Agnes Martin’s art is emotive. Her meticulous hand drawn lines and soft, smooth surfaces of slightly color tinted whites give order and tranquility to an oft times chaotic world. Her meticulous order evokes a quiet beauty. Depending on one’s perspective in viewing Martin’s 6 foot by 6 foot canvases from close inspection can be seen a particular vigorous repetition of matter that at a distance reveals a luminous atmosphere. Rather than facts, her works reveal moods or subjective thoughts.  Agnes Martin’s words illuminate her art, “The clear blue sky illustrates a different kind of happiness and the soft dark night a different kind.  There are an infinite number of different kinds of happiness.”

Their art could be compared by differing phenomenological interpretations in which Martin’s leans toward spiritual and Ryman’s towards matter. Yet, like charts with intersecting circles, they do overlap.

They alone do not paint with white; Kazimir Malevich before them and many others after them; such as, James Turell, Rosana Castrillo Diaz, and Tom Friedman.

James Turell’s Afrum (white) appears to be a free-floating glowing box of light in the corner of the room, but is actually an opening in the wall that is brilliantly lit from within. The awe experience can be an exhilarating to the viewer, an optical illusion of sorts. The illusion draws the viewer into its space as if entering another world.  His work combines a technical skill with an emotive phenomenological reaction to light and color.

Tom Friedman’s 1000 hours of staring, is a white piece of paper that he spent 1000 hours staring at. This is conceptual art exemplified. Yet, it reveals the discipline, devotion, and even the work of coming to a studio day after day waiting for the creative process to surface, opening up the space that is needed to find illumination.

Rosana Castrillo Diaz’s white paintings, differ from the aforementioned in that they are not a study of materials, nor an expression of what is in the mind – rather they are aesthetically precise and luminescent white paintings. The goal of her process in creating art is to work towards invisibility. The allure of her work, whether it is created from tape, paper, or paint is to almost disappear.  Catrillo Diaz’s art is a presence shadowed by its own absence.

In the vastness of white, the viewer becomes an active part of the art with mind, imagination, and sensibility. And, actually, perhaps, this space or quiet of ‘nothing’ is the something we all need more of.  Agnes Martin’s words, illuminate the beauty and neccesity of space and emptiness where all can be seen clearly and vividly, “ If you live by inspiration then you do what comes to you…The future’s a blank page…I pretend I was looking at the blank page. I used to look in my mind for the unwritten page, if my mind was empty enough I could see it…I have a clear empty mind. Then I can see when something comes into it. “ The stillness, whiteness, and silence in the images offer pause, slowness, and an increasing significance in the image-ridden, over stimulating, visual society of today. 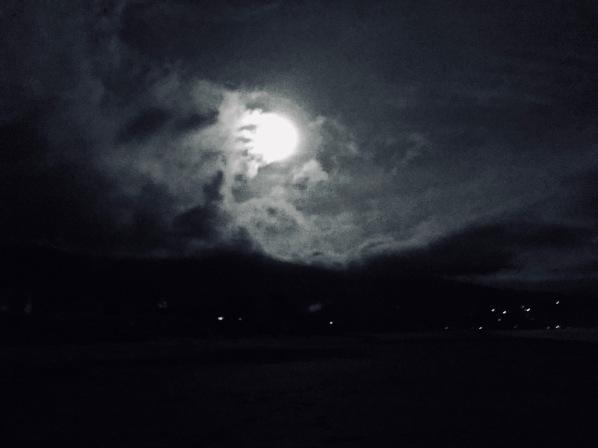 When the moon is full one can walk by night. The whole world covered in a blanket of moonlight. The voluptuous bright moon illuminates the contours of the ground and the outlines of the trees and lines the edges of the clouds with a white light giving a glow. One is not alone in hearing the silence of the night, not silent at all.

I would like to acknowledge, Erasing.tumblr.com, a blog that exhibits many white art works.